I haven't been blogging in a while and after my transplant evaluation I felt like I needed a break. CF felt like it was taking over my whole life and I just wanted to step away from writing about it in my blog for a little. It has been almost 9 months since my evaluation and my lung function and my quality of life was remaining the same. I was getting sick more often and IVs were still not overly effective, but I didn't have a significant drop or anything that affected my transplant status. I was driving to Stanford every 2-3 months to be monitored, but I was still too healthy to list.

But this update is about Trikafta and not transplant so moving on... When I heard rumors about Vertex providing Trikafta for compassionate use I tried so hard to get on it! Unfortunately, for my mutation getting compassionate use was tricky. I fell into the guidelines and applied, but then the FDA changed the criteria and made everyone reapply. My CF nurse reapplied and said I still fell within their guidelines and we really thought I would be granted compassionate use. The wait felt like it was forever and I kept worrying I would get sick beyond repair while I waited. And then I got the news the FDA approved Trikafta. I was thrilled, of course, but part of me was disappointed that it happened before my compassionate use was granted. Now all compassionate use applications were useless and I was now depending on my insurance. I called and emailed my insurance and pharmacy every day. I was going to make sure I didn't get lost in a stack or pushed to the end of the pile.

I was approved by my insurance and started Trikafta the day after Thanksgiving. What a great reason to be thankful!! So how has it been going?

One of my best friends was visiting from out of town when I took my first dose. I literally popped the first dose and left to spend the day out and about with her. I was distracted and not paying attention to how my body felt except I knew I was coughing a LOT and my coughing felt different. More wet and being productive was so much easier.

I have always been very productive and it caused a lot of issues because I produced so much, it was virtually impossible to feel clear even after treatments. Treatments always felt like a huge workout. I had so much mucus and it was so hard to clear I would often be sweating and red in the face and exhausted after treatments! Within a few days I noticed my production went way down and by day four I was not coughing ANYTHING up at treatments. My cough just disappeared!!

This lack of mucus and coughing both thrilled and terrified me. I have a huge inflammatory response and normally when I get less productive it means my inflammation is out of control and I start getting a lot of plugging which is a nasty cycle that feels impossible to break from. I had a hard time mentally accepting that my lungs were responding to the meds and I didn't need to cough so much. What!? MY heavy producing, never clear, highly sensitive lungs didn't need to cough? It felt unreal and a bit terrifying.

Another massive change I noticed on Trikafta was my inflammation improved so much I can hardly believe it! I usually carry my combivent inhaler everywhere I go. It sits next to my bed at night and it comes in my purse everywhere. If I go for a walk it is in my pocket! I use it several times a day when well and I use it a million times a day when unwell. I now take it before treatments (and not the second I open my eyes) and that is it! I have noticed with my home pft monitor that I still have inflammation because my pfts jump pretty significantly after my combivent, but my lungs are doing so much better I don't feel a difference. Prior to trikafta I would often feel like I was suffocating if I went to long without a bronchodilator.

Within a few days of starting Trikafta I went to cut down a Christmas tree with my family. We drive to a much higher elevation and in the past I really struggled with the elevation and hills. In fact, I wondered if I should go at all this year because I was worried I wouldn't be able to handle it. I did go, but immediately saw the hills and felt dread! We were standing at the top of a steep hill and all the kids decided to run down to look for a tree. I stood at the top and was assessing if I could make it back up the hill if I followed the kids down. I decided I probably couldn't and decided to stay put. But somehow I got distracted and ended up at the bottom of the hill. And before I knew it I was in my car on the way home before it dawned on me, I just spent the entire morning walking up and down hills without realizing it!! No huffing and puffing, no headache from lack of oxygen, not struggle. In fact, I didn't even notice. How AMAZING is that?

The last major improvement I noticed within the first few weeks was that my energy level was INSANE! Within a few weeks of starting I was helping put on a school event. I warned the others on the PTA that I would help if I could, but depending on how I was feeling I may not be able to help at all. When the day arrived, I started working at the school around 11:30am to set up, worked the entire event, and was one of the last to leave when the principal locked up the school on our way out at 9:30pm. When I got home and realized I still had energy I was astounded. Usually, my energy level is so low and if I push myself I pay for it the next several days. But I was acting like a real 35 year old!

This is getting long so this is the last thing I will say. My whole adult life my CF has been a huge rollercoaster ride. So many times I felt like my health turned around and I was so optimistic for the future, but then as soon as it improved it would all crash down. My health history taught me that the highs were temporary and the lows were always right around the corner. Years ago I would celebrate my improvements, but as my health got more complicated I learned to enjoy the highs in my CF, but to brace for the low. It was always right around the corner. And in the past few years my highs lasted a week or two before I would feel the downward slide back to poor health. My brain was so trained that for weeks I couldn't feel overly excited about Trikafta. I felt like I would enjoy better health, but like always, it would be ripped away from me before long. I have been on modifiers before and the results seemed temporary and faded just like everything else health wise. So I talk about these improvements and I noticed them and felt hopeful, but it was clouded with doubt and caution. But I felt hope, cautious hope, but real hope for the first time in years.
Posted by Inhaling Hope at 7:37 AM

Need to find something fast? Search This Blog 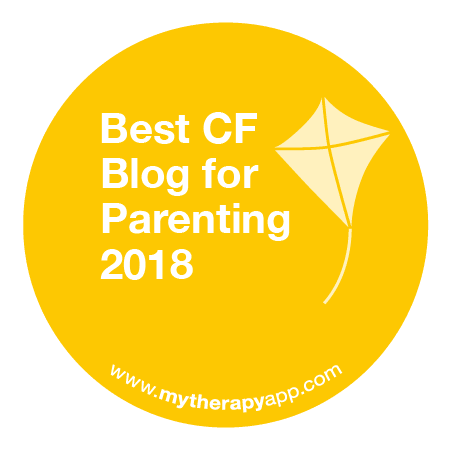 Inhaling Hope
I am in my mid-30s and living with Cystic Fibrosis. My blog follows my journey of ttc, pregnancy, and motherhood while trying to navigate the scary and unpredictable world of Cystic Fibrosis.